2011..Abaad’s Report: 2,443 killed since the eruption of Yemeni revolution 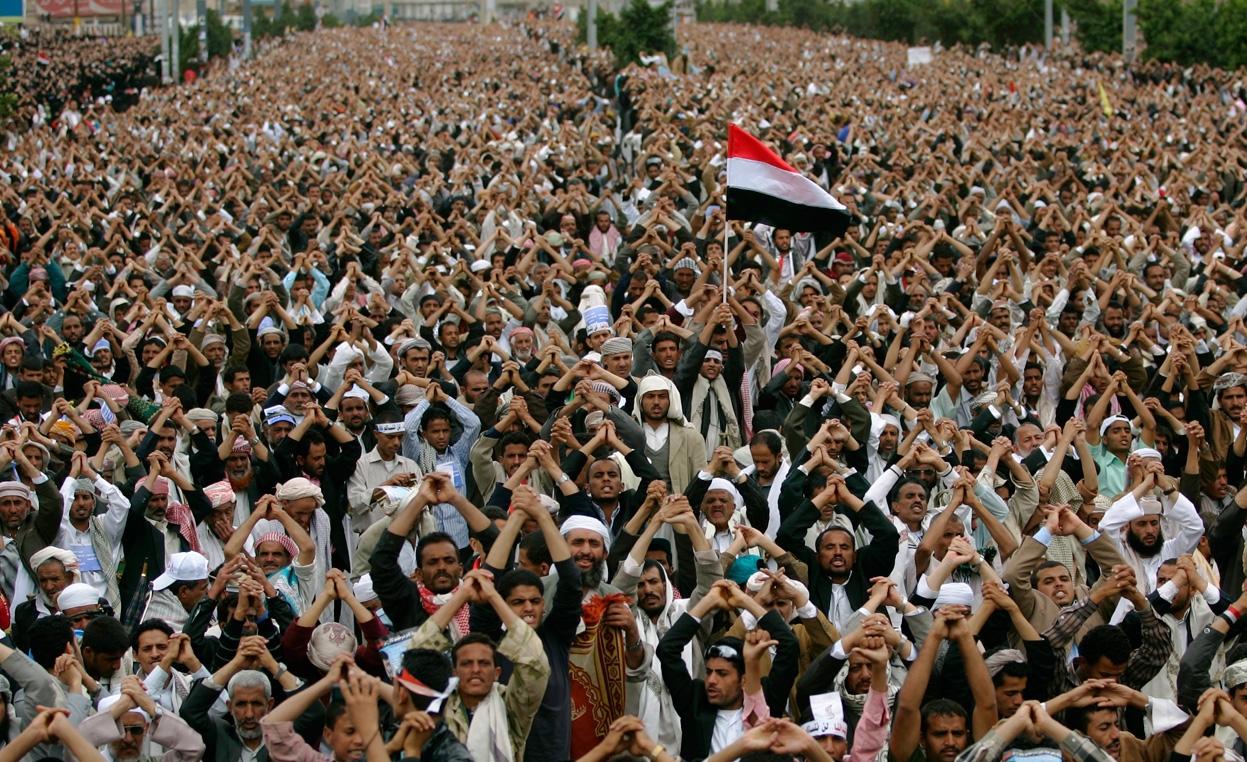 It explained in detail the losses and casualties from Hasaba war, shedding light on the tragic conditions the people of Arahab have been suffering as confrontations with the Republican Guards continued unabated.

An article entitled ” The Trial of the Mountain….Arhab the Story of the Scorched Land” tackled some historical , geographical and military implications of Assama’a mount overlooking Capital Sana’a.

Corridors of Politics :
Politically speaking, one analysis debated the political status of the Yemeni political parties ,the role they currently play in igniting the protest movement demanding the toppling of Saleh’s regime, and the role they are presumed to play in the future.
A study on the national council that has recently been created demonstrated that this council was not up to the expectations of the youth due to some mistakes made by its founders- such as non-coordination, among others. It suggested some solutions to rectify such mistakes and to enable the council shoulder its own responsibility to the people, including by setting out a vision for the transitional period and its priorities, and the revitalization of its media performance.
Another study focused on the impact of the foreign intervention, mainly that of Saudi Arabia, on the Yemeni uprising, highlighting the effect of pragmatism on the international positions on the Yemeni revolt.
All such studies hinted at the constants and variables of the US foreign policy towards the Arab region.
Decade of Ideology:
Ideologically speaking, a study discussed the “status of Mareb governorate between interests and ideology”, concluding that ” During his reign, Saleh applied the strategy of building up alliances based on interests”.
An analytic article touched upon the alliances that have recently been forged between the regime and extremist groups and how such alliances led to new anti-regime alliances that have emerged since the eruption of the revolution.
Another ideological article stated that there is need for a civil state to administer justice and protect common interests. This is due to the intellectual and ideological paradoxes existing currently in the country.
“The intricate ideological contradictions may pose a threat to the clan , sectarian or confessional state. However, they are a precondition for the creation of a modern civil state,” it concluded.
A study on Al-Qaeda organization said that ” the harbingers of change, coupled with a new formula of political legitimacy, Al-Qaeda figures prominently as a key challenge to the builders of the new Yemen, putting them to testing”.
“The most crucial challenges that should be encountered in the future, aside from the results of the current protest movement, lies in how to help Yemen avoid the danger of sliding more into destructive chaos,” it noted.
It discussed the reasons for the clashes flared up between the Houthis and JMPs supporters in Al-Jawf province, the Houthi inter-fighting, and laid down a future vision for the status of these provinces.
A juristic study stated that the provisions of Islamic Sharia do in fact vary based on time and place.
Vision for New Yemen:
Some researchers set out some views on the features of the forthcoming Yemeni state. They deliberated in their researches the issues of terrorism, Houthi insurgency and the Southern Mobility Movement.
” if the state of modern institution was created, and social justice, coupled with equal citizenship, achieved , alongside real power-sharing and wealth-sharing, terrorism would drop in the future, if not totally disappear due to the lack of its breeding ground . The same applies to the issues of Houthis in Sa’ada and the southern protest movement. Still, there are other political factors, including the fact that the regime, during its reign, used political and security cards to serve its own illegal interests,” it remarked.
Another study on the “civil state” recommended the fragmentation of the system of despotism and dictatorship in order to move to a real competitive phase during which time the civil state will be built.
On the future of foreign relations and international agreements, the study confirmed that Yemen, with its future state and geographic location, should work hard towards developing its relations with the international community, using foreign relations in the service of its development and in the achievement of sustained stability and cooperation, taking part in charting a course for the world order, giving a special importance to human rights and freedoms in such a manner that enhances human role in delineating a better future for the whole world, and fulfilling the commitments of the accords and treaties to which it is a signatory”.
“There are three major tasks to be done by the future Yemeni state after the ouster of the regime. These include putting a halt to the security and economic deterioration and the squandering of wealth besides specifying the relation between the state and the tribes, and resolving the problems emanating from land-grabs,” it stated.
The package included an interview with a high-profile Arab thinker, who spoke elaborately of the Arab revolutions in general and the Yemeni uprising in particular.

Yemen in 2018: Between War Economy and Pursuit of Death

Cost of the Coup.. Postponed Retaliation

safe separation is hard to be achieved in the short-term